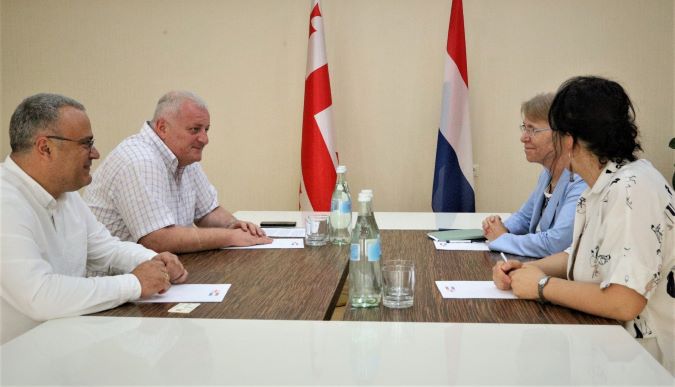 State Representative of Samegrelo - Zemo Svaneti Giorgi Guguchia, along with Zugdidi Municipality Mayor Mamuka Tsotsoria, met with the Ambassador of the Kingdom of the Netherlands to Georgia Maaike van Koldam.

At a meeting with the Governor of Samegrelo-Zemo Svaneti region Mr Giorgi Guguchia and the Mayor of Zugdidi, Mr Mamuka Tsotsoria, the Ambassador got acquainted with the work of the local government, their current projects and future plans, and shared information about the embassy’s work in the region in the areas of human rights, environment and agriculture.

With the financial support of the Embassy of the Netherlands, the project of promoting the fight against violence against women, early detection and supporting victims is being implemented in the Samegrelo - Zemo Svaneti region. Besides, the Embassy of the Netherlands works in the direction of environmental protection and agriculture in the region.

" Today we hosted the ambassador of the Netherlands. During the meeting we discussed the projects supported by the embassy, future cooperation areas, and the issues related an investment attraction in the region. Close economic relations have been established between our countries. It is significant that the Kingdom of the Netherlands has maintained its leading position in the number of investments made in Georgia from EU member states" – said the  State Representative of Samegrelo - Zemo Svaneti Giorgi Guguchia

On the other hand, the ambassador evaluated his first visit to the region: "I am glad that today I am in Samegrelo Zemo Svaneti, this is our first visit. We met with the local government, civil society, and set the activities to be implemented jointly. Our main areas are gender, women's rights, human rights, agriculture is also important. The experience of the Netherlands is well used in Samegrelo-Zemo Svaneti, and we intend to cooperate with local farmers in the future."  The ambassador is in the region for the second day. Yesterday, on August 24, she attended the opening ceremony of the association "Mercury" project "Improving the condition of women and girls in Samegrelo-Zemo Svaneti region". The project is financed by the Embassy of the Netherlands.

At the meeting with the ambassador, the mayor of Zugdidi spoke about the topics of mutual cooperation and thanked the Embassy of the Netherlands for its support: "Today, together with the governor of the region, we met with the ambassador of the Kingdom of the Netherlands, we thanked her for her support of Georgia, territorial integrity and non-recognition policy, and also introduced the main priorities of the region and Zugdidi municipality. We identified certain areas, such as economy, agriculture and other directions, where we can cooperate and set future plans. We are sure that today's visit and meeting will be fruitful for our municipality," said the mayor of Zugdidi municipality, Mamuka Tsotseria.